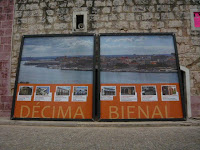 Original version of a review of the Tenth Havana Biennial; an edited version appeared in Artforum, Summer 2009.


Any discussion of the Tenth Havana Bienal necessitates a brief recap of its particular history. In recent years it’s become a something of a cliché to lament the biennial as prime symptom of the art world’s increasing homogenisation. To visit the Tenth Havana Bienal, however, is to be confronted with an exception to this rule. This is partly due to Cuba’s unique situation as a country under economic blockade, enduring the final, disintegrating flourishes of state socialism. But it is also due to the specific remit of the Havana Bienal, which has since its inception asserted consciousness of centre-periphery relations and the need to establish an alternative model to the West. The first three biennials (1984, 1986, 1989) set out to promote dialogue across the Southern hemisphere – the Caribbean, South America, and Africa. As such it was the first international biennial to pay serious attention to the post-colonial theory and to reflect this in its selection of artists – a discourse that would become the norm, indeed the expectation, for most Western biennials after 1989. The early Havana biennials were also the first to support the exhibition with a conference – another innovation that would only later become current in the West a decade later.

What this means historically, as Rafal Niemojewski has argued, is that the Havana Bienal arguably stands as the model for today’s discursive, transnational biennial – in contrast to Venice, which emerged from a nineteenth-century framework of the nation-state. Yet although many of the characteristics of early Havana biennials have been absorbed by the Western model, there remain important differences that continue to reflect the anti-hegemonic attitude of the island. Those expecting to see the big-name biennial players should expect disappointment: with the exception of Stan Douglas and Cai Guo-Qiang, such artists are almost entirely absent in favour of a focus on practitioners in the Caribbean, Central and South America. There are no celebrated superstar curators. And there’s very little sense of the show being mounted for the sake of international visitors. Although the 1997 Bienal received criticism for courting tourism, my experience of the 2009 edition was of an exhibition almost obstructively resistant to hasty consumption. Foreigners are charged a small fortune to see the show ($60) and the press even more ($250); Cubans pay $3. It was five days before I found a map of the venues, and this didn’t include opening times, which led to frequent and frustrating encounters with closed buildings.

In terms of venues, in recent years the Bienal has tended to occupy the Centro Wilfredo Lam, and the fortress of San Carlos de la Cabaña, a series of long thin buildings each containing an enfilade of low-ceilinged rooms. For this Bienal – its twenty-fifth anniversary as well as the fiftieth anniversary of the Revolution – an unprecedented number of these military buildings were taken over, along with fourteen other venues in Habana Vieja and Vedado, including the Fototeca de Cuba, the Museo Nacional de Bellas Artes, and the Convento San Francisco de Asis. Accompanying this was a collateral programme of over 100 exhibitions, including work by respected Cubans not included in the main Bienal, such as the conceptual painter Lazzaro Saaveda.

Curated by an eight-person team from the Centro Wilfredo Lam, the 10th edition has the quintessentially biennialish title Integration and Resistance in a Global Era. The main exhibition at the Fortaleza de la Cabaña was disappointing, indeed grindingly bad. It was gruelling to encounter so many dated instances of installation art: poorly realised mises-en-scène, or decisions to fill a room with large amounts of pipes, tyres, leaves, etc. (The Mexican performer Silverio pithily summarised the aesthetic as ‘overproduced with no budget’.) There was an abundance of photographic practices making simplistic denunciations of global capitalism (eg images of indigenous peoples wearing branded t-shirts); an exception was Ananké Asseff’s Potencial (2005-7), a series of life-size photographs of average-looking citizens in their homes, all of whom were discreetly holding firearms – weapons of self-protection as one more extension of their domestic furnishings. Video works were rather few on the ground, and of interest primarily for their studium rather than any conceptual twist, such as Yong Soon Min’s subterfuge footage of North Korea, or Chen Xiaoyun’s vignette of a Chinese orchestra for disabled and disfigured musicians. There was very little by way of the social, interdisciplinary, 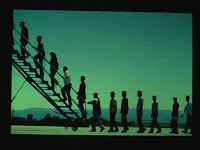 and research-based work that has come to be a mainstay of Western biennials. The most poignant piece was a five minute video by Adrián Paci (Centro di Permanenza Temporanea, 2007), a concise portrait of illegal immigrants at San Francisco airport, climbing the stairs to board a plane. As the camera panned back, it became clear that there was no plane to board, only a bleak tableau of fify or so men and women standing on a portable staircase to nowhere.

Paci’s work was a moment of relief amongst a slew of weakly curated juxtapositions at Cabaña: unrelated works crammed together in one space, having either no relation to each other or far too much. Other venues had a more thematic focus: the Pabellón Cuba seemed to focus on architecture and mapping, but the 1960s tropical modernist building was more memorable than most of the works on display. The Centro Cultural Bertolt Brecht was one of the venues whose doors were perpetually shut to me, but good reports were heard about its gender-themed show, which featured a live performance of two transsexuals re-enacting Yves Klein’s Anthropométries in shocking pink paint. Displays of work by respected older figures were small but consistently rewarding: an extremely cogent selection of three recent works by the Uruguayan conceptualist 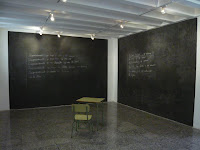 Luis Camnitzer (at the Centro Wilfredo Lam), an illuminating show of 70s and 80s mail art by the Brazilian Paulo Bruscky (at the Biblioteca Pública), and a retrospective of the ever-wonderful León Ferrari (at Casa de las Américas). Although somewhat shabbily presented, the Ferrari retrospective was far more faithful to the vision, range and political commitments of this senior Argentinian than the concurrent show of his work at MoMA.

In terms of younger art with energy and substance to match Ferrari, the most dynamic project by far was Estado de Excepción, held over nine nights at the Galería Habana. Since 2003, the Cuban artist Tania Bruguera has run Catédra de Arte de Conducta, an informal art school as a work of art, dedicated to producing a new generation of Cuban artists committed to working politically with their social reality. Estado de Excepción was her farewell to the school, and the consolidation of six years’ work. Every evening between 5-9pm, Bruguera and her co-curator Mailyn Machado produced a different group show from work produced at the school, tightly curated around themes such as ‘Jurisdiction’, ‘Useful Art’ and ‘Trafficking Information’. Many of these short, sharp interventions outstripped everything else in the biennial in terms of their subversive wit and relevance to the Cuban situation, frequently dealing with issues of censorship, internet restrictions and social taboos. Each 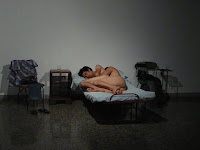 exhibition also included a ‘special guest’, selected from one of the many former tutors who had come to teach on the project, including Dora García, Thomas Hirschhorn, and Artur Žmijewski. Of these, Elmgreen and Dragset’s Performance (2009) was the most compelling: two young men sat on chairs either side of a bed, then stood up, undressed and spooned on the bed, before dressing and sitting again. These actions were repeated for the four hours of the show, as if on a video loop.

Since setting up Arte de Conducta, Bruguera has tried to avoid producing acolytes by not showing her own work in Cuba. Since Estado de Excepción marked the end of this school, she could break her rule and, at the invitation of Guillermo Gomez-Peña, produced an untitled event on Sunday 29 March in the central courtyard at Centro Wilfredo Lam. A large brown curtain hung as a backdrop to a stage with podium and microphones. Two hundred disposable cameras were issued to the crowd, who were informed that for the duration of the performance they had freedom of speech for one minute. In contrast to the innumerable efforts of Western artists to provide ‘soap box’ type events for the democratic airing of grievances, in Cuba such freedom of 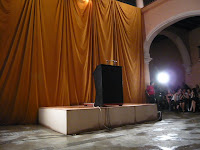 speech is strictly prohibited. As the media thronged around, the atmosphere was utterly electric; would anyone take up the opportunity to speak their mind and face the consequences? The first person on stage was clearly primed by Bruguera: a woman took to the podium, where she stood and wept, hands shaking as she clutched the microphone. She was flanked, as were all the subsequent speakers, by a man and woman in military garb who placed a single white dove on her shoulder – a visual echo of Fidel Castro’s post-Revolutionary speech in 1959. The second speaker was the well-known ‘dissident’ Yoani Sanchez, who pleaded for freedom of access to the internet. Those who spoke for longer than a minute were forcibly bundled off stage by the fatigue-clad duo.

The combination of formal precision (the set-up of the podium, the militaristic assistants, the uncontrolled dissemination of documentation via the cameras) was countered by the the unpredictability of the flapping dove and the mixed emotions of those who chose to speak. As with all participatory works, the content was somewhat hit and miss: for every pained call for ‘Libertad!’ and ‘One day freedom of speech won’t be performance art!’, there were self-promotional foreigners jumping on the bandwagon to chip in. After one hour Bruguera closed the piece by pointedly thanking all the Cubans. In the following days, the organizing 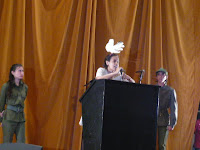 committee of the biennial published a communique repudiating the comments of the speakers who took over the microphone, arguing that they had hijacked the event to ‘strike a blow at the Cuban Revolution’. This document didn’t indict Bruguera directly – but as Yoani Sanchez notes in her blog Generation Y, without this official reaction, the piece would not be complete; indeed, its absence would have proven that Bruguera’s event was staged for the benefit of international visitors.

The painful reality is that there is no freedom of speech in Cuba, and this is one reason why so much work in the Bienal was ideologically correct and so utterly tepid. Innocuous expressions of anti-globalisation sit unproblematically within the anti-imperialist discourse of the Cuban authorities. In the following days, this was apparently compounded in the conference (Evento Teoretico), which a friend described to me as ‘an extension of the rhetoric of the biennial, with a lot of old Spanish Marxists speaking for endless hours belaboring the same apocalyptic points around how the market has killed any possibility of art-making’. Significantly, no Cubans were invited to speak at the event. This is a great pity. Historically, the Havana Bienal has shown great initiative in rethinking the purpose and realisation of large-scale international exhibitions; this year, it seems, only Bruguera’s projects looked to the future, rather than serving to reinforce a false present.

I sense that ye be a wee bit.....iconclastic, ehhhh?

If moi's brain has correctly analyzed ye may dig this bit of godless/satanlessness.....
http://www.youtube.com/watch?v=_m6qC6FCiY0 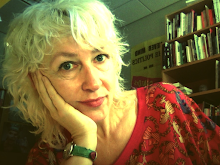